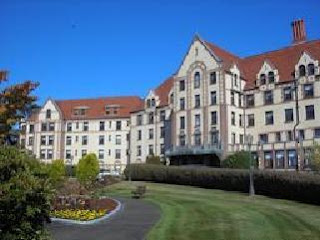 There are dozens of reasons to come down to the 7th Annual Poverty Bay Wine Festival, which runs this coming weekend (March 4-6th), from the 23 local wineries, various food vendors, local beer samplings, live music, Triumphs and MINI Coopers parked out front, great crowds as well as the fantastic causes this event supports for the community.
Another huge reason to venture down is that it is being held in the Landmark Event Center, a grand, historic building that once served as the Masonic Retirement Center of Washington. Built in 1926, this majestic, six-story, castle-like building is so cool that you can get lost just walking around admiring it. And when you do come, be sure to check out the ultra-cool time capsule that’s set in the center of the front courtyard.
A quick lesson for all of you history buffs out there: In 1892 the seeds were planted for the establishment of a haven for needy Masons, their wives, widows and orphans. In 1922, the Masonic Lodges were favorable to the erection of a Home in Des Moines. On May 19, 1924 the site was purchased for $78,624.95 – a total of 82 acres. The building was dedicated on June 21, 1927. The first year the Home had 107 residents. Time and expenses caused many changes over the years, including the sale of a total of 47 of the original 82 acres. In 2003, a redevelopment plan for a new retirement community was unveiled. In the late 2000s, the redevelopment plans were put on hold and the Masonic organization opened up the building for use as an event center.
The Landmark Event Center truly is the Castle on the Hill. With beautiful grounds, stunning views and ornate architecture, we recommend that our wine festival attendees venture in and explore the dining hall, the library, living room and wander up the ramp to the third floor auditorium, paying special attention to the long-dead Grand Master Masons whose pictures line the wall, as well as some of the detailed touches, such as a marble plaque dated Feb. 12, 1913 near the entrance. It’s no wonder the Landmark Event Center’s tag line is “History, elegance and spectacular views…. all in one place!” 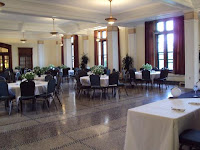 The Rotary Club of Des Moines has held the Poverty Bay Wine Festival in this historic site for the last three years. The entire gang behind our sister site The Waterland Blog will be there this year as well – so come on down!
For more information on the Poverty Bay Wine Festival or to order tickets, please visit www.dmrotary.org.
Here’s a story first posted in March, 2009 when our sister site The Waterland Blog had its “coming out party” at the wine fest that gives a pretty good taste of the place:

by Bart Bryan and Mark Neuman
The Landmark On the Sound, host to this weekend’s Poverty Bay Wine Festival, has quite the Masonic history.

In 1926, the Masons decided to build a retirement home for themselves on a ridge with a commanding view of Puget Sound in the then-town of Zenith, which is now part of Des Moines. Constructed of slate and copper, Terra Cotta and Terrazzo, marble and stained glass, this majestic “castle on the hill” played host to the Des Moines Poverty Bay Wine Festival this weekend. This impressive 27-acre campus, as well as the historic Landmark building, is undergoing a complete renovation and expansion into a new senior living community.

In between manning our table, we had a chance to wander around, and on one such wandering, found our way to the top of a ramp near the second floor auditorium tasting room and performance stage, where we found some classic photos of previous Masonic Grand Masters.
Yes, that’s right – photos beginning with, as the caption on the picture says, “Our first Grand Master, Thornton F. McElroy,” [term beginning Dec. 8, 1858].
If you ever have a chance to visit this building, be sure to wander up the ramp and enjoy the mugs of such brethren Masonic luminaries as:

We recommend re-reading the above names…ALOUD…to anyone in the room at home with you right now.
Particularly: Fred Winkels…and…Audley Mahaffey.
While our Waterland Blog Reporters were upstairs capturing the Grand Masters’ names and the Masonic spirit of the era, they happened to bump into a Wine Festival visitor today, one Phyllis Askren, daughter-in-law of Grand Master Thomas M. Askren, who served his term when Herbert Hoover was in the White House.