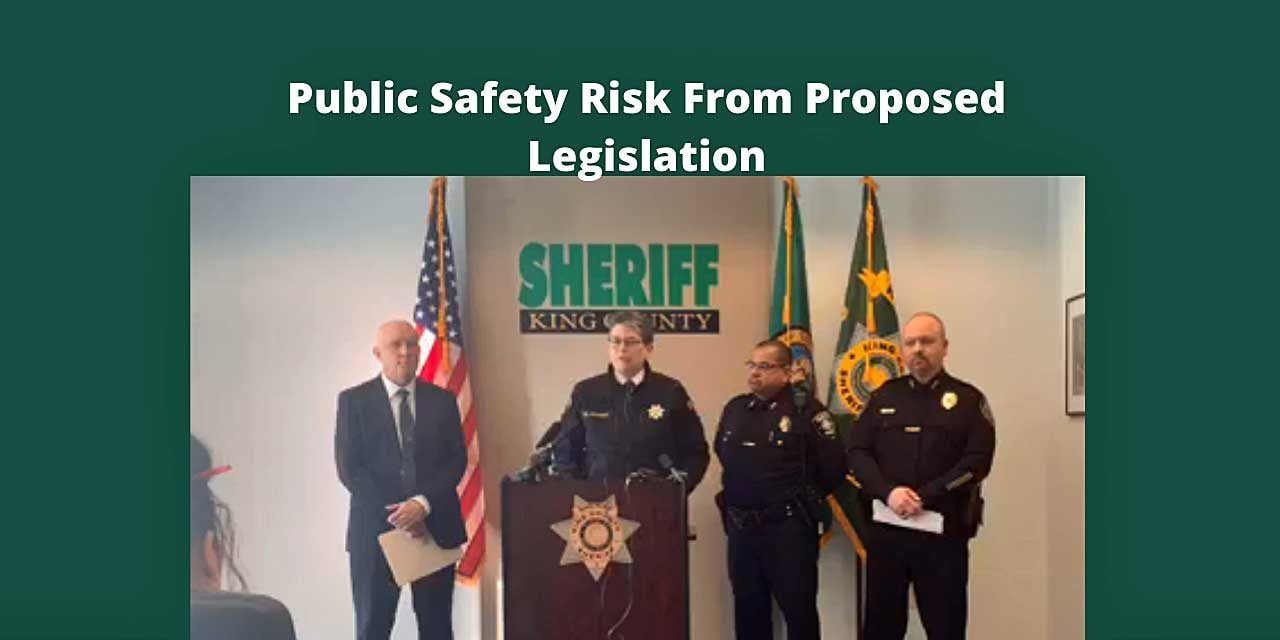 Sheriff Mitzi G. Johanknecht hosted a news conference on Friday, Feb. 21, 2020, to voice concern and opposition to proposed legislation in Olympia that would reduce supervision for released prisoners.

The King County Sheriff’s Office contracts its police force with Burien, SeaTac and others in the area.

“This is only going to increase the revolving door of offenders that so many in our communities have expressed concern about.”

Three measures (HB 2393, SHB 2394 and SHB 2417) would reduce the number of Community Corrections Officers and allow thousands of former inmates to go unwatched instead of complying with court ordered supervision.

“The recent shooting in downtown Seattle has the public asking tough questions about how the suspects were allowed to be on the streets after more than 60 previous combined arrests,” said Steven Strachan, Executive Director of the Washington Association of Sheriffs and Police Chiefs (WASPC). “These bills only add to the problem of keeping track of convicted criminals who violate the terms of their release.”

The measures would cut funding for more than 200 Community Corrections Officers who supervise people who are required to comply with post-incarceration supervision such as drug treatment and testing, and not contacting victims. They also would result in a $50 million cut to supervision programs over the next five years.

The legislation also breaks the promises made when “Swift and Certain” policies were enacted in 2012. When the Swift and Certain model was implemented, law enforcement leaders were assured it was based on the best available science, and that it was evidence-based. Now, the Legislature is considering breaking from those principles because they might be inconvenient to those who violate the terms of their community supervision. There is also no real commitment to use the savings to ensure success for those who have been released. Reentry and reintegration programs and treatment while in jail require an investment. Criminal justice reform should not be about saving a few dollars- it should be about public safety. If we need reform, let’s do that together.

If the Legislature chooses to enact any of these bills, they should require that the savings associated be appropriated into a special account, used to promote successful re-entry back into the community. Public safety and the success of persons facing re-entry into the community are too important.