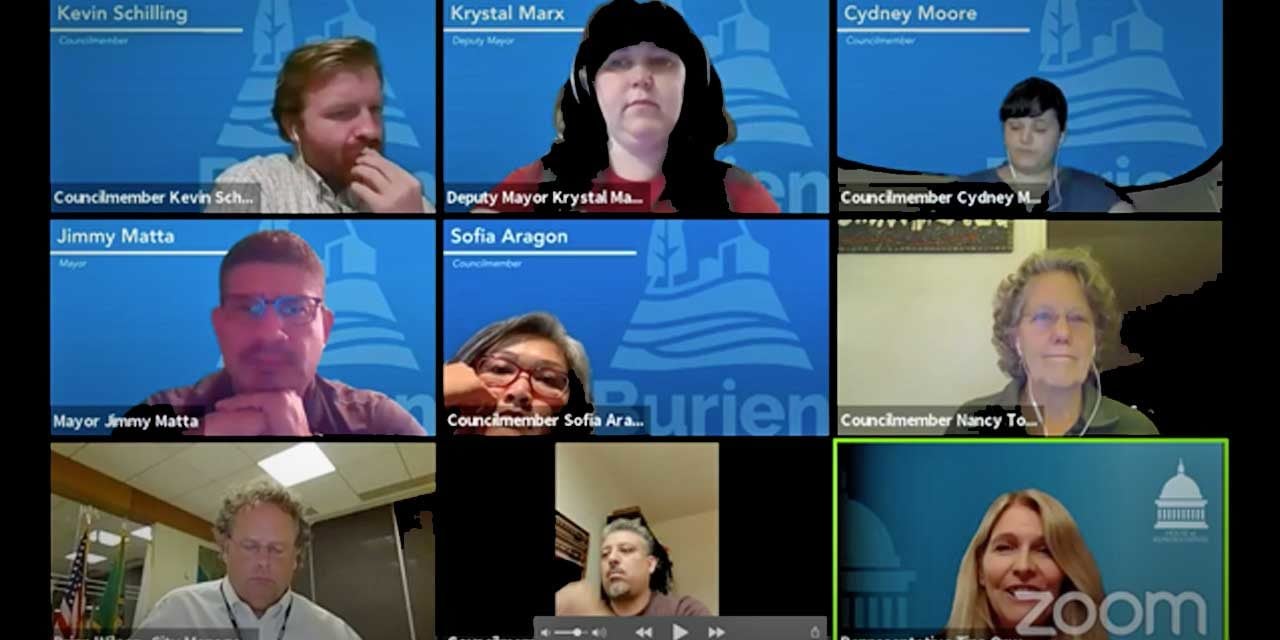 The Burien City Council in another one of their marathon meetings on Monday night, Oct. 19 agreed to temporarily halt development on Ambaum Blvd. SW while redevelopment of the arterial is underway

Halt on Ambaum
Nicole Gaudette, the city’s senior long-range planner, reminded the Council that it has adopted a temporary halt to new development within 300 feet of planned RapidRide H Line enhanced bus stops along the Ambaum corridor. The halt, said Gaudette, will allow city staff to develop amendments to the zoning regulations along the corridor. There will be an emphasis on regulations that support transit-oriented developments that, in turn, support “community goals” near transit corridor.

State law requires a public hearing on the potential change, she said.

Resident Daniel Martin told Council it “sounds like a brilliant idea to halt any building projects while you are figuring out how to transition to Rapid Ride, so I support the moratorium.”

Fine particle pollution
State Rep. Tina Orwall, D-33rd District, told the Burien Council of a potential agreement on boosting a study by the University of Washington of ultra fine particles coming from jet aircraft at Sea-Tac Airport that would include the cities of Burien, Des Moines, SeaTac, Normandy Park and Federal Way. Several Councilmembers lauded her for the assistance on studying continued airport problems.

The proposed study was approved unanimously by the Council. It will be conducted by the University of Washington and “aims to demonstrate the effectiveness and measure the impact of intervening within a school environment to reduce exposures to airborne particles of outdoor and indoor origin.”

The first phase of the study will have a budget of an undetermined cost, and the proposed study cost will be $250,000.The cities will “collectively provide $60,000 to fund Phase 1 of the study. Each party shall equally pay $12,500 for its share of the Phase 1 funding in a lump sum t… upon execution of a contract with the University of Washington.”

The city says Orwall intends to request money during the 2021 Legislature for Phase 2 of the Study. There is not current agreement on how and who will participate in the study but “It is not the intent of this agreement to commit” cities to provide money for the second phase of the study.

Force by police
City to tell Legislature it supports “standard” use of force for police officers.

In the cities’ legislative agenda, Lyset Cadena, the city’s legislative lobbyist, said she expects a 2021 session with problems over whether the session is a regular one or held virtually due to the COVID-19 pandemic. Cadena is a contract lobbyist with experience in local government and transportation issues.

The city’s support list includes “a statewide standard for use of force and the creation of a database to track officers who have been fired from their employment for misconduct.” Burien also would “support the expansion of grounds for decertification to include use of force violations,” and support for “policies requiring (that) an investigation of an officer be completed, regardless of whether the officer resigns prior to an investigation being completed.”