Opening its doors in the early 1920s, Highline High School students and teachers last year said their farewells to a historic Burien landmark where generations of families have walked in and out of for nearly a century of use.

The school – which was over 90 years old – was identified as a top priority for capital improvements. The building was outdated and had failing mechanical systems, ultimately meaning the infrastructure was not up to date in supporting today’s technology expected in schools.

Despite undergoing new additions followed by occasional renovations, the school had run its course going beyond the buildings’ physical lifespan. The latest renovation was 25 years ago and included remodeling classrooms but excluded the heating and plumbing systems that needed the necessary attention. Plumbing was in poor condition, mechanical systems were failing, leaking took place in the sprinkler system, and failing cornice joints when they had a building evaluation back in 2013. On some rainy days, classes even had to be canceled due to leaky roofs.

Closing down in June of 2019, the demolition progress began in July and lasted until October with the building being so old the bricks couldn’t be salvaged or handed out to the public because of toxins. Following demolition, construction was underway immediately after in November. Progression is still being made as the school looks to open in the fall of the upcoming 2021-22 school year.

SHINY NEW ATHLETIC FACILITIES
On the athletic side of things, Highline’s brand new tennis court were finished earlier this year in February for which they held a ribbon-cutting ceremony, including the coach and some players as well.

Highline High School Tennis Coach Scott Babcock cut the ribbon at a very small, very wet ceremony on Feb. 26 to mark the completion of six new purple tennis courts at the Sunnydale site. Tennis players Graham Luethe and Emily Vorng (both Class of 2022) held up the ends of the ribbon tied to their rackets.

After speeches cut short by a downpour, Athletic Director Lori Box (’85) challenged Scott, who is marking his 26th year of coaching tennis and teaching band, to a match. Graham and Emily squared off. And alumni matches were played by Dave Larson (’69), Julie (Fenton) Kemp (’81), Jim Kemp (’81) Eric Todd (’99) and Jacqueline Kemp (’16). Finally, Lori also played Highline’s Director of Athletics Phil Willenbrock. No word on who won!

The courts – located just south on the Sunnydale campus – are purple with gold and white striping. A bathroom facility is nearby. A large drainage swale was installed between the courts and the existing soccer field on the south.

For this spring and at least part of summer, the courts will be used by the tennis team only. The new courts will open to the public during daylight, non-school hours once the Highline High School construction project reaches a phase called “substantial completion,” which is estimated to be mid July. 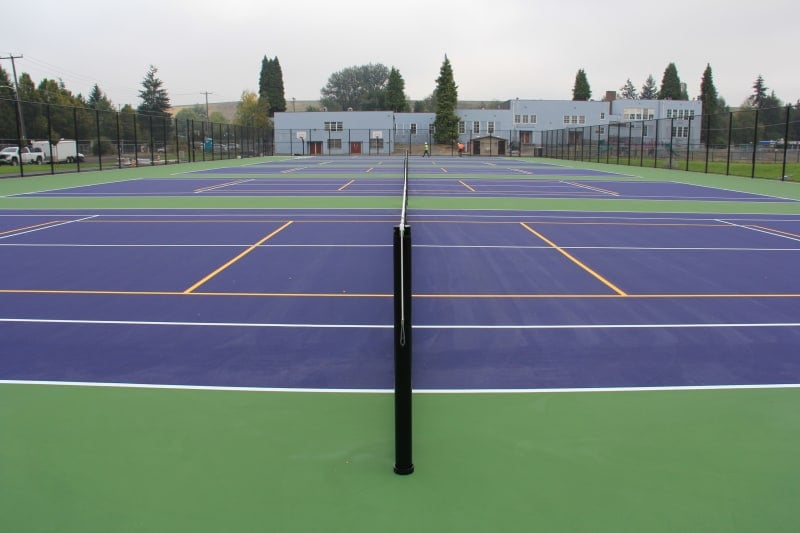 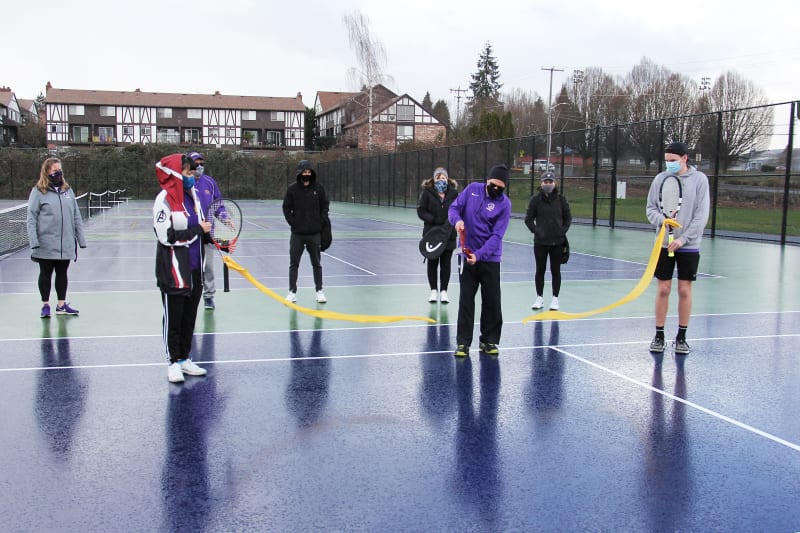 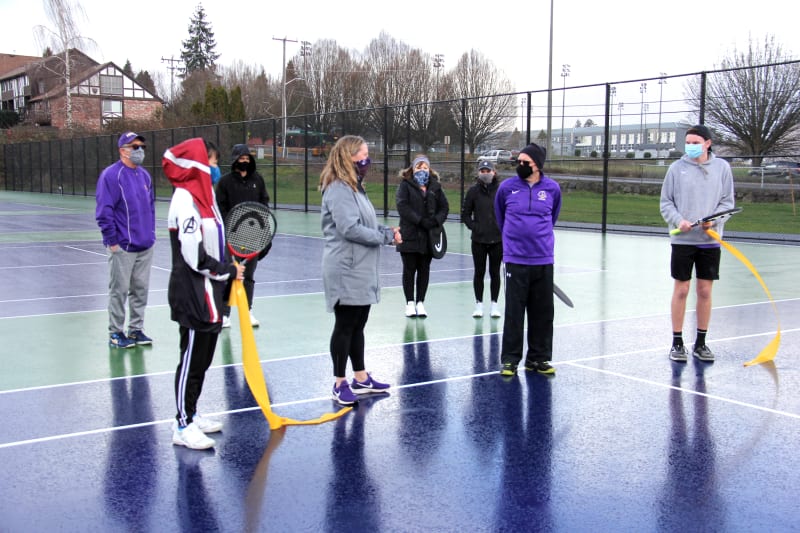 Also, the school’s gym is finished, filled with purple and gold on the bleachers and court followed by their school mascot – a pirate on the wall. On the baseline, it reads ‘Highline Pirates’ and the letter ‘H’ at half-court. The school’s gymnasium will be used for both boys’ and girls’ sports which include basketball, volleyball, wrestling, and gymnastics. 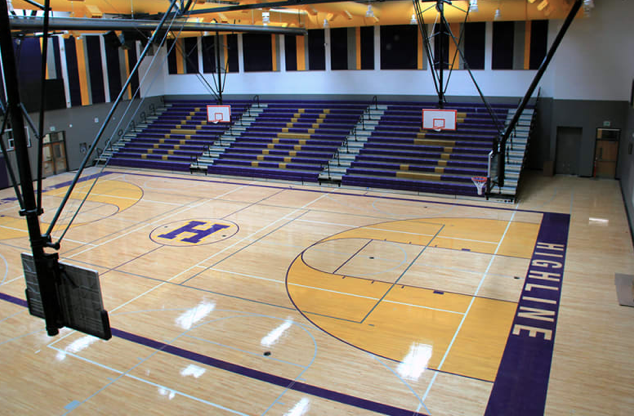 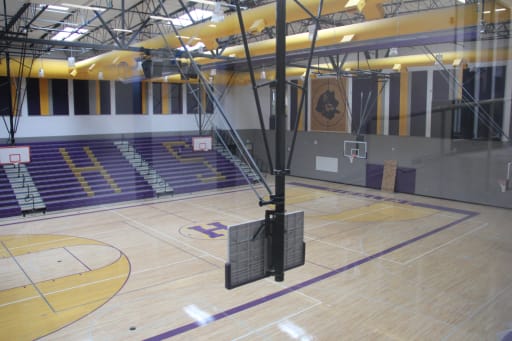 The exterior of Highline High, such as the buildings, historic main and southeast entrances, southeast courtyard, and westside driveway are all finished. Currently, construction has moved from the southeast corner to the northwest corner of the site, and the new school is still scheduled to open this September.

GRAND REOPENING WILL BE OCT. 21 & 22
All are invited to join in to celebrate the Grand Reopening of Highline High School’s new state-of-the-art campus at one of these events during Homecoming Week this coming fall:

“Make a plan to attend the football game on Friday evening and cheer on the Pirates!”