LETTER TO THE EDITOR: ‘Redistricting is complete, so who represents you in Burien?’

[EDITOR’S NOTE: The following is a Letter to the Editor, submitted by a verified resident. It does not necessarily reflect the opinions of The B-Town Blog, nor its staff:]

Redistricting is complete, so who represents you in Burien?

Our country does a population census every 10 years, the last one taking place in 2020. There are multiple reasons for doing a census (https://www.census.gov/programs-surveys/censuses.html); this one in particular, known of as the Decennial Census, was designed to count every resident in the country in order to determine the number of seats each state holds in the US House of Representatives. This is done by US Constitutional mandate (https://www.archives.gov/founding-docs/constitution-transcript). Seats are assigned based on the population of each state and are reapportioned as state populations change. So depending on the outcome, it is possible that states will gain or lose seats in this process.

In addition to balancing the number of representatives each state sends to Congress, the numbers in the Decennial Census are used within Washington State (https://leg.wa.gov/CodeReviser/Pages/WAConstitution.aspx#ARTICLE_II) (and others) to rebalance our Congressional and Legislative Districts (https://www.redistricting.wa.gov/). King County also uses the numbers to balance and set our King County districts. In other words, every 10 years, there is a chance that each of us will have some of the people who represent us change. With elections coming up in 2022 at the Congressional and State levels, it’s a good time to learn or revisit who your elected officials are (https://kingcounty.maps.arcgis.com/apps/webappviewer/index.html?id=4412d015887a42fbb271be454852a15f), so that you can make well informed decisions at voting time about who best represents your values. If your district has changed, you may need to learn some new names and read up.

So, that being said, who represents Burien?

US House of Representatives:
At the federal level, Washington has retained all 10 of our seats. Most Burien residents remain within the 7th Congressional District being represented by Pramila Jayapal (https://jayapal.house.gov/). Based on some small deviations between city and census boundaries on the Burien-Tukwila border, there may be a few Burien residents who reside in the 9th Congressional District and are represented by Adam Smith (https://adamsmith.house.gov/):

Washington State Legislature:
Here is where a map might be easier to understand than writing it out. What has not changed is that Burien continues to be split between Washington’s 33rd and 34th Legislative Districts. What has changed is the boundary between the districts. This change affects all residents except those living in the NW corner of the city. The updated map’s boundary, for simplicity’s sake, goes east to west and is at about 128th St; the southern part being in the 33rd and the northern part being in the 34th. The previous boundary ran north to south down the city roughly at HWY 509 to 160th and then jogged over to the water just south of Three Tree Point; the east side being in the 33rd and the west in the 34th. 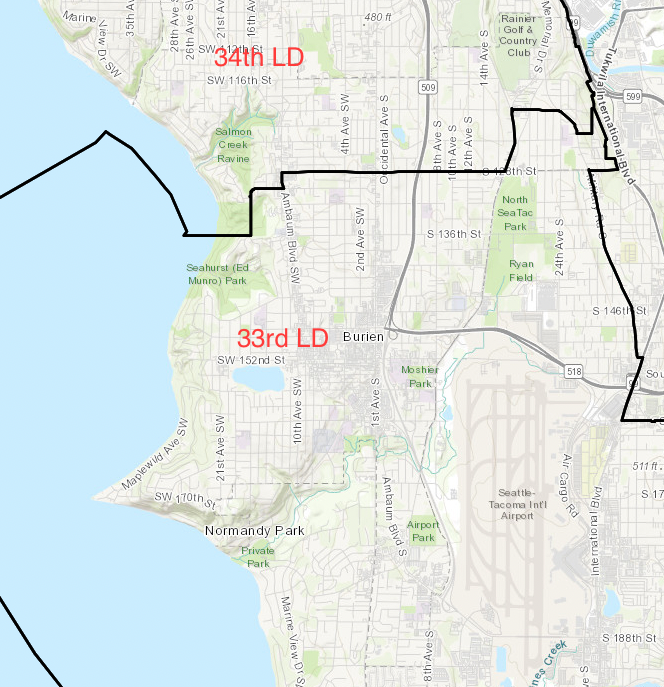 Our State Legislators are:

King County Council:
Burien residents all now share one KC Council district, District 8, which is represented by Joe McDermott (https://kingcounty.gov/council/mcdermott.aspx). The 8th County District includes Burien, (about half of) Tukwila, Vashon & Maury Islands, White Center, and parts of Seattle, including South Park, Georgetown, SODO, and Downtown. Prior to redistricting Burien was split between the 5th (represented by Dave Upthegrove) and the 8th roughly along 152nd St.

City of Burien:
Some cities in Washington State (including Seattle and Yakima) split their council into districts based on population. Burien does not have council districts. Our seven council members (https://burienwa.gov/city_hall/city_council) are all “at large,” meaning they are all elected to represent all Burien residents.

Redistricting can be a bit unsettling. We have new representatives to learn about, and for many who have spent time developing a relationship with their elected officials, it often means starting over. That being said, ensuring equal representation is an important part of our system of government. We hope that you will use this information to do some research to find out more about those who represent you at the different levels. You may want to look at the committees they serve on, as well as legislation they have introduced and/or sponsored to help you get a feel for their main areas of interest. Last, but certainly not least, we recommend reaching out to these folks to introduce yourself and share your priorities. Just as you have new representatives, they have new constituents. It is important for them to know who they report to, so they should be excited to get to know you.

The ACLU Burien People Power team is part of the ACLU’s grassroots member-mobilization project. Through public speaking, trainings, letter writing, dialogue with public officials, and public engagement we affirm our American values of respect, equity, justice and solidarity. In our actions we support our community and the rights guaranteed to all in the laws and the Constitution of our nation.

EDITOR’S NOTE: Do you have an opinion you’d like to share with our highly engaged local Readers? If so, please email your Letter to the Editor to [email protected] and, pending review and verification, we may publish it. Letter writers must use their full names and cite sources – as well as provide an address and phone number (NOT for publication but for verification purposes). Read our full Letter to the Editor submission guidelines here.