Save $5 Off Burien Actors Theatre’s ‘Rocky Horror Show,’ which runs thru Mar. 22

Burien Actors Theatre’s (“BAT”) production of Richard O’Brien’s The Rocky Horror Show, an outrageous musical comedy, is a party that encourages audience participation, as well as a send-up of sexual awakening and sci-fi/horror genres.

“THE ROCKY HORROR SHOW”
In a musical send-up of sexual awakening, sweethearts Brad and Janet, stranded during a storm, discover the eerie mansion of a Transylvanian transvestite scientist and his household of unforgettable characters. Come do The Time Warp again in this sexy parody of sci-fi/horror genres. Join us for throwback cult classic honoring our 40th season! Costumes are encouraged.

Richard O’Brien’s The Rocky Horror Show – music, lyrics and book by Richard O’Brien – debuted on stage June 19, 1973, in London where it ran for 2,960 performances before closing in early September of 1980. Since its debut, the show has been translated into a variety of languages and produced in cities all over the world, including two runs on Broadway and BAT’s 2008 production. In 1975, the show was also made into the popular cult movie The Rocky Horror Picture Show.

Contains a little adult language (one “D”, one “F”, and three “G” words), plus sexuality.

Performances are Fridays and Saturdays at 8 p.m., and Sunday matinees at 2 p.m. at Burien Actors Theatre, located at 14501 4th Ave SW in Burien (map below).

CLICK THE IMAGE BELOW AND PRINT THIS $5 OFF COUPON:

For tickets, special deals or other information, go to www.burienactorstheatre.org or call 206-242-5180.

Richard O’Brien’s The Rocky Horror Show is sponsored by 4Culture and Pickled & Preserved.

THE MUSIC AND MUSICIANS
Among the songs in this revival version of the production are the popular Sweet Transvestite and the highly participative The Time Warp. To make this soundtrack really throb, the show’s band includes Music Director Aimee Hong as band leader on keyboards, Brian Keiper on lead guitar, Julie Felts on bass guitar, Cody Clark (Feb. 21-March 1) and William Bryant (March 6-22) sharing the saxophone position, and Tai Taitano on drums.

ABOUT BURIEN ACTORS THEATRE
Exciting live theater has been a tradition in Burien since 1955. Incorporated in 1980, Burien Actors Theatre is a leading producer of quality live theater serving residents of the Seattle and south Puget Sound areas.

BAT gives audiences an intriguing and invigorating theatre experience with unusual and fantastical productions they can’t stream online or see anywhere else. The company’s mission is to treat audiences to productions of the highest artistic integrity that excite, engage and involve both the local and expanding theatrical communities in the Puget Sound region. 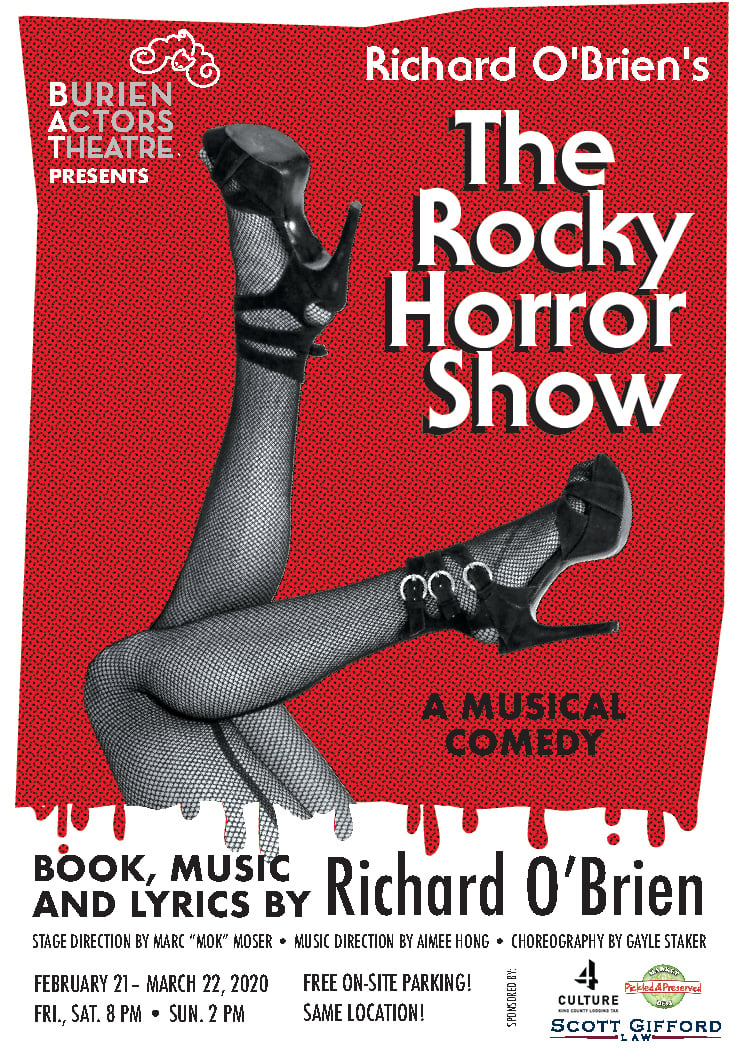