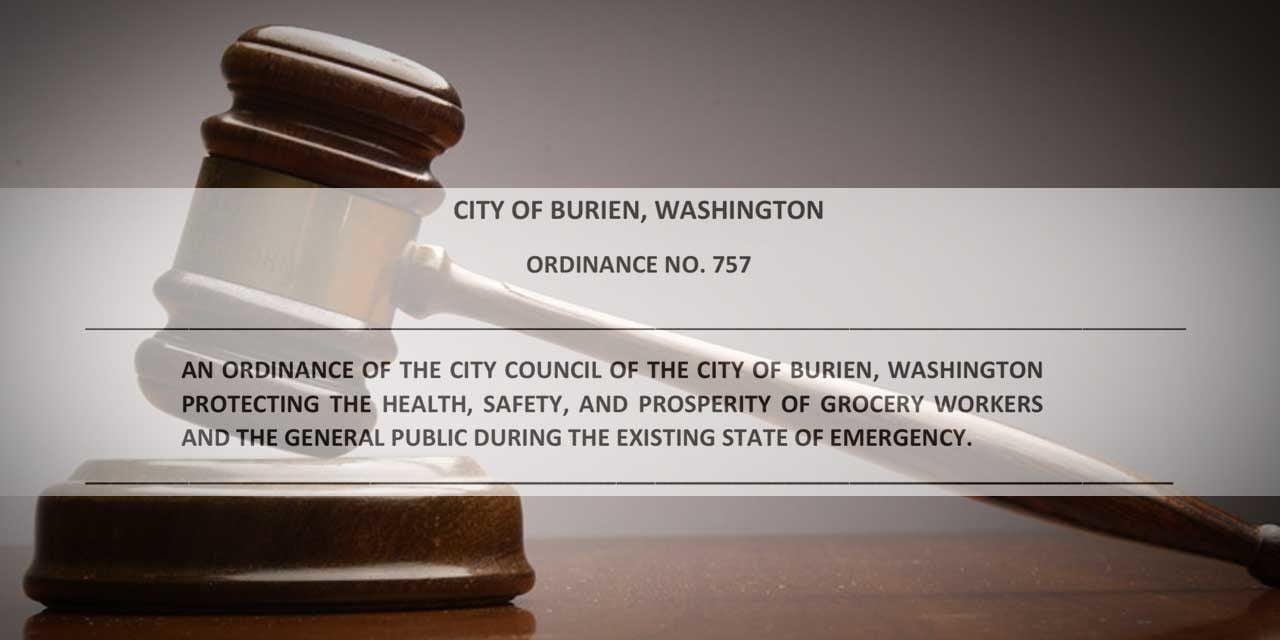 The Northwest Grocery Association (NWGA) and the Washington Food Industry Association (WFIA) this week filed a lawsuit against the City of Burien challenging Ordinance No. 757 (view/download PDF here), approved by the Burien City Council that took effect on Wednesday, Feb. 17, 2021 at 12:01 a.m.

The ordinance mandates extra pay of $5.00 per hour for some grocery store employees during the COVID-19 pandemic emergency, “treating essential businesses and workers unfairly and bypassing collective bargaining agreements,” according to the lawsuit.

The lawsuit, filed in U.S. District Court Western District of Washington, asks the court to “declare the new ordinance void and to grant a preliminary and permanent injunction against enforcement of the ordinance.”

The suit will likely track with a similar suit filed against the City of Seattle on Feb. 3.

As we previously reported, the new law was passed at the Burien City Council on Feb. 8, 2021.

“At this time, we are considering all of our options,” City of Burien Communications Officer Emily Inlow-Hood told The B-Town Blog when reached for comment.

“The Chamber expressed concerns when the ordinance was first presented without public input or opportunity to review,” Seattle Southside Chamber of Commerce CEO Andrea Reay said. “Specifically, in our letter and public comments, we expressed that the ordinance could have unintended outcomes despite its well-meaning intention. These include legal challenges that cost our community dearly as well as the loss of stores, jobs, and food security through an exacerbated, already fragile food access system. Such outcomes are already evident in Seattle, Long Beach, CA and now here in Burien. We sincerely believe that when policy is enacted about the business community without input from the business community, there are negative consequences. We also believe that we can create better outcomes for both workers and businesses when policy is crafted in an inclusive, transparent, and comprehensive way. Together we are stronger and we must find a way to come together to keep our workers, our businesses, and our community safe and healthy.”

“Our grocery members care about the safety of all essential workers and we have invested heavily in safety measures and benefits to our workers. This ordinance doesn’t do anything to make grocery workers safer. If the city council wants to make them safer, we ask them to help us in asking the Governor to prioritize vaccination for all essential workers now, regardless of age,” said Amanda Dalton, NWGA President. “Washington grocery stores have been safe throughout the pandemic and remain safe. Filing another lawsuit is the last thing we want to do, but the unequal application of this ordinance is unfair and illegal and needs to be challenged on its merits.”

“Independent grocers are going to have to make some hard decisions about how to comply with this mandate,“ said Tammie Hetrick, President & CEO of the WFIA. “Many have already indicated this is not sustainable for four months as required without significant changes in their business model. The added burden of COVID safety protocols, enhanced online capabilities to serve our customers during the pandemic, and drastically increasing theft levels have been very costly, and our members are already having discussions about different ideas of how to keep their doors open.”

The lawsuit alleges that the City of Burien ordinance is illegal in two ways:

Here’s more from the grocers associations:

The inequality of the ordinance is significant and perplexing. Under the ordinance, a worker who makes sub sandwiches at a quick-serve restaurant is not covered, but a grocery worker who makes a sub sandwich is covered. Similarly, a grocery worker who stocks apples in a store will be paid more, but the workers who pick and pack the fruit are not covered. Meat processing workers are not covered, but meat counter grocery workers are. Teachers, hospital staff and other critical frontline workers, including those employed by the city, are left out. And the Department of Labor’s statistics show that all of the industries noted above have suffered far more outbreaks than the grocery industry.

In addition to the inherent contradictions and exclusions in the ordinance, the City Council enacted it with little public input, without industry input, outside of collective bargaining agreements, and without a complete analysis of the impacts of the ordinance on families, communities, and businesses.

“Our city leaders should be focused on making our community safe and healthy again,” said Dalton. “We already provide best-in-industry compensation packages every day and provided expanded compensation packages as a result of the pandemic, while keeping our stores safe. Now, the best way to reward our heroes is to get them vaccinated and to let us help vaccinate our communities.”