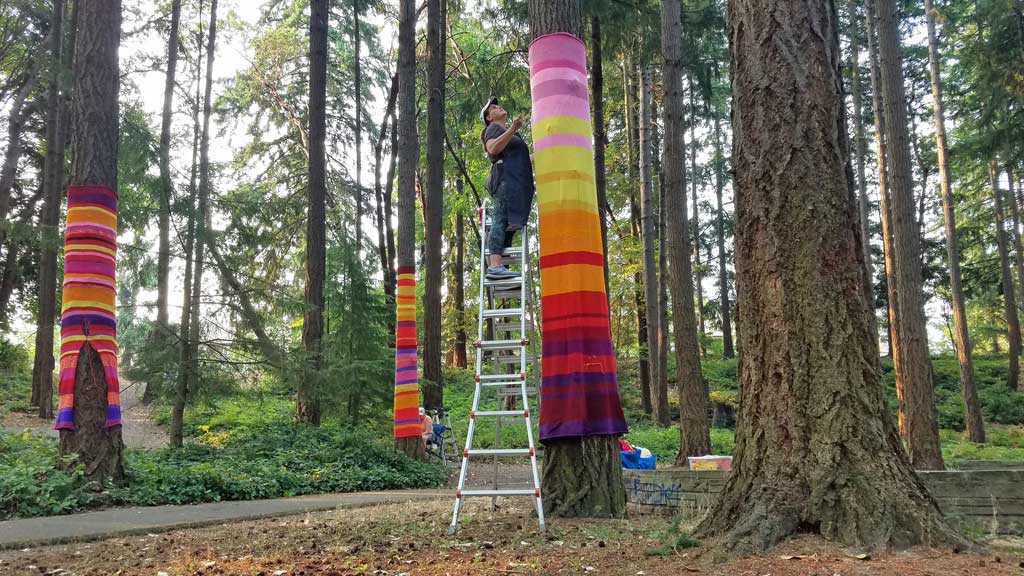 Fiber artist Suzanne Tidwell dresses an evergreen tree in a brightly colored sweater Friday morning in Burien’s Dottie Harper Park along with fellow artist Barbara Noonan (background). The installation will remain in place through the end of September.

Fiber artist Suzanne Tidwell was keeping cool in the shade of tall evergreens Friday morning as she and a fellow artist dressed the trees in “artificial light,” which also happens to be the title of Tidwell’s current installation at Dottie Harper Park in Burien.

The Seattle-area artist – who plans to spend the weekend outfitting at least 12 trees with whimsical, brightly colored sweaters – said the heavily wooded, city-center park not only offers a respite from the current heat and smoke, it serves as an ideal spot to stumble upon something unexpected, something magical.

“It’s ephemeral, unexpected and just makes people happy,” Tidwell said while standing on a ladder, stitching a sweater around the trunk of a tree in the center of what is known as the Daylight Art Gallery.

The “Artificial Light” installation of sweaters, which will stick around through the end of September, is part of several installations and activities planned ahead of the Sept. 11 return of Burien’s Arts-A-Glow Light Festival, this year centered around Burien’s Town Square Park and downtown business district.

To learn more about these artistic happenings around town, visit https://www.facebook.com/artsaglow/ or https://www.burienwa.gov/cms/one.aspx?portalId=11046019&pageId=17914273. Artificial Light began in 2011 as a summer ArtsParks project in Seattle’s Occidental Square with the hope of turning an underutilized downtown Seattle Park into a lively, safe and welcoming public space for all. Residents, tourists, shoppers, art patrons, sports enthusiasts, and casual passersby were drawn in by the unexpected color, playful stripes, and whimsical scenery. It took over a month to install and Artificial Light was only up for a month, but this temporary installation made quite an impact on the city. Each tree sweater was knit by the artist and contains a thousand rows of knitting. They are hand sewn in place by the artist and a team of helpers.

“After a few months, the project was installed again at City Hall Park in Seattle, then later moved to Anderson Park in Redmond where it was expanded to cover 50 trees. This installation of what came to be known “the tree sweaters” and was timed to coincide with International Yarn Bombing Day – a day celebrated by subversive knitters everywhere.

“Back in 2011, the artist’s intention in creating Artificial Light was to replicate sunshine, even if the weather would not cooperate. Seattle had suffered from an interminably wet winter, followed by a particularly soggy spring, with one of the lowest ratios of sunny days in recent history. Now, ten years later it is hoped that Artificial Light’s reinstallation at Dottie Harper Park to celebrate Arts-A-Glow will bring us outdoors and into the light once again following 18 months of lockdowns and COVID restrictions. While we are not quite back to normal yet, we can enjoy the fun and whimsy of bright color at a safe social distance.”

Arts-A-Glow is a festival celebrating art in Burien each September.  For more information on the 2021 event please go to www.burienwa.gov/GLOW