Burien needs to triple its housing production. Here’s how it plans to do that. Allow duplexes and triplexes in single-family zones. Designate surplus, city-owned land for affordable housing. Relax parking and other requirements for multi-family developments, and expand the use of tax breaks in exchange for affordable units in those developments.

These are just a few of the 13 recommended strategies – laid out in Burien’s recently finalized Housing Action Plan – to boost the city’s housing stock some 36 percent by 2044, a target established in King County’s Urban Growth Capacity Report released in June.

That target amounts to an additional 7,500 housing units, or 313 units per year, which is three times the city’s average yearly rate of housing production – 105 units per year – between 2011 and 2019.

Following a presentation and discussion, the Burien City Council voted unanimously Monday evening to place the 110-page Housing Action Plan, which is nearly two years in the making, onto the council’s Sept. 20 consent agenda for adoption. The plan, authored by Seattle-based consultant ECONorthwest, will serve as a sort of roadmap for growing and diversifying the city’s housing supply while also addressing issues of affordability and disparity.

“This is really a toolkit,” Tyler Bump, an ECONorthwest project director, told the city council Monday evening. “It identifies some things that we’ve evaluated pretty in depth, honestly, about what might have the most impact. The zoning code changes are some of the clearest opportunities for short-term wins.”

City planners are eager to begin implementing the plan’s recommendations, said Susan McLain, the city’s Community Development director, particularly with regard to planning efforts specific to the Ambaum Boulevard corridor and the Boulevard Park neighborhood.

“The next step is to see where we can implement some of these strategies and recommended actions into our work program,” McLain said. “Some of them we’d like to implement in the coming year with the Ambaum corridor and Boulevard Park. And we’re really eager to take a look at some zoning in and around the downtown urban center for housing, for livability and for jobs, too.” Other not-previously mentioned recommendations include specific strategies aimed at preserving existing affordable housing, preventing displacement of those at high risk of losing their housing, and embracing transit-oriented development principles, particularly along Ambaum Boulevard.

Those principles encourage planners to relax limits on density and building height while requiring less parking and open space in order to reduce regulatory barriers to the financial feasibility of property development.

Bump recommended coupling those measures with a fine-tuned Multifamily Tax Exemption Program (MFTE), which already exists for developments in the city’s downtown urban center. The plan recommends expanding that tax exemption program beyond the city’s downtown to other suitable areas, such as the Ambaum corridor.

“A lot of these things go together to get the outcome that we want to see,” Bump said. “So MFTE needs to move along with some changes in the development standards to make it a little bit easier. So it is kind of a multi-pronged approach.”

An analysis of Burien’s housing needs, conducted as part of the city’s new plan, found that while the average rent for a two-bedroom apartment in the city rose 45 percent and the median home sales price more than doubled between 2013 and 2020, the median household income in Burien rose just 20 percent between 2010 and 2018.

“We’ve seen a large increase in housing costs for both renters and homeowners, but not a proportionate increase in incomes,” Bump said, noting that Burien housing prices have increased 17 percent during the COVID-19 pandemic despite speculation that prices would fall amid the economic shutdown.

As a result of that imbalance, most renters, especially those who make less than 80 percent of the area median income (AMI), are cost-burdened, spending more than 30 percent of their household income on rent.

Some 39 percent of the city’s renters – which make up 47 percent of all households in Burien compared with 53 percent homeowners – are spending more than 50 percent of their household income on rent, making them severely cost-burdened. And when cost-burdening is broken down by race, people of color are over-represented.

“Households of color are disproportionately more cost-burdened in Burien, which is not unique to Burien,” Bump said, noting that Black households represent 25 percent of all cost-burdened households despite Black residents making up less than 13 percent of the population. “And the same is true of those households who identify as Hispanic or Latino, as well.” 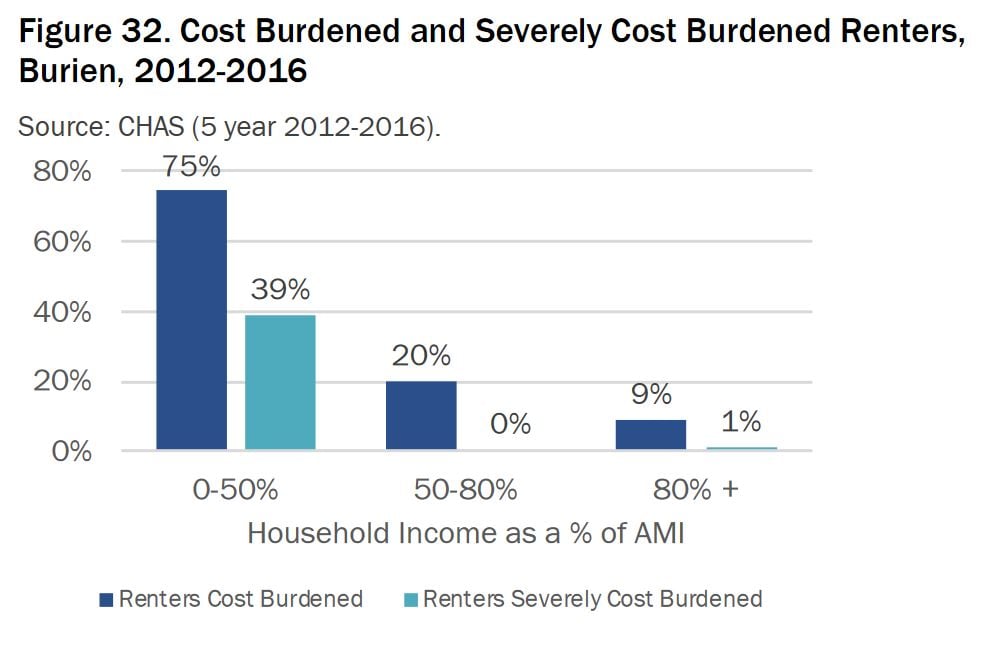 Images courtesy of the City of Burien, Housing Action Plan