In this Friday afternoon photo taken from the corner of Maplewild Avenue SW and SW 172nd Street, pedestrians walk along SW 172nd Street as American flags fly above beach cabanas, detached garages, patios and bulkheads on the south side of the street. In a draft letter to property owners along this street, the city of Burien says unpermitted permanent structures on the beach side of the street are illegal.

Dozens of unpermitted beach cabanas, detached garages and other permanent structures on the south side of Three Tree Point – between SW 172nd Street and the waters of Puget Sound – are illegal, and the city of Burien’s Public Works director may order their removal, according to a draft letter the city plans to send to some 40 addresses along the narrow, beach-side boulevard.

On Monday, Aug. 16, the city council unanimously signed off on City Manager Brian Wilson’s request to send the letter, which Wilson noted is “not talking about any individual property, but it is us as a city ensuring that our right-of-way is maintained and that we have jurisdiction over the right-of-way on 172nd.” 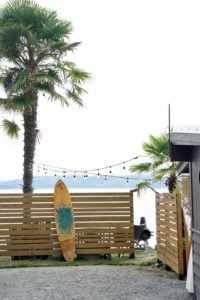 A surfboard leans against a fence on the beach side of SW 172nd Street along the south side of Three Tree Point in Burien.

The city’s assertion – that unpermitted beach cabanas along the third-of-a-mile-long stretch are illegal – is premised on the width of the city’s public right-of-way being 80 feet, encompassing not just the paved, 15-foot-wide roadway itself but also the beach on its south side.

“Obstructions in the public street right-of-way obstruct and limit pedestrian and vehicular traffic safety, utility and essential infrastructure access, and the City of Burien’s ability to install sidewalks, bicycle lanes, run-off areas, and public parking,” the city wrote in an email Friday to The B-Town Blog, noting that the letter is an effort to protect the city and ensure access to the beach.

“Unregulated uses of the public street right-of-way also results in potential environmental and flooding-related concerns as well as potential liability,” the city said.

The letter states that “if an incident occurs in the public street right-of-way involving an unpermitted obstruction or encroachment, Burien’s position is that the property owner will be responsible. A property owner wishing to limit or avoid such significant risk should immediately remove their obstruction or encroachment from the public street right-of-way.”

The city declined to say whether anything specific precipitated the city’s decision to draft and send a letter at this time, especially considering most of the beach cabanas and other permanent structures have been in place for decades.

For some residents along 172nd Street, the letter is just the latest salvo in a decades-long dispute between property owners and the city over control of the beach.

“Since we’ve lived there, for the past 22 years, they have been trying to build a case that they have a claim to this property,” said resident Andy Kleitsch. “It’s clearly a plot by the city to take control of this property. They have been harassing the owners down here and stacking the deck against us for decades.”

Kleitsch cited a December 2004 report, commissioned by a group of residents along SW 172nd Street and authored by a forensic title expert with input from a land surveyor, a lawyer and another title expert.

That report concluded that, although the right-of-way was platted and recorded with King County as being 80 feet wide in 1907, the width was “lawfully reduced” to 30 feet by the time the roadway itself was constructed in 1919.

On top of that, Kleitsch said the titles for properties along SW 172nd Street are inconsistent in how they define the width of the right-of-way, and that many titles say the easement is for the explicit purpose of constructing a road.

“The intent was to upgrade it from a path to a road,” Kleitsch said. “The property owners were never intending to give up their property.”

In June 2016, several property owners who were embroiled in a years-long legal dispute with a neighbor argued in federal court that any land dedicated to the public by the original property owners was intended solely for use as a street, and not for public beach access.

Those property owners were responding to a motion – brought by the city of Burien, which was also a party to the years-long legal dispute between neighbors – asking the court to declare the beach-side stretch of SW 172nd Street an 80-foot right-of-way. In support of its 2016 motion asking a federal court judge to declare SW 172nd Street an 80-foot right-of-way, the city of Burien submitted this 1907 plat map of “Seacoma Beach,” which states that the “owners in fee simple declare this said plat and dedicate to the use of the public forever the streets as laid out hereon.”

In support of its motion, the city submitted a declaration from its assistant Public Works director along with a copy of the original 1907 plat map of “Seacoma Beach,” an early name for the area indicating the point’s position halfway between Seattle and Tacoma.

“In my opinion, the dedicated street was intended to be 80 feet wide,” Brian Roberts wrote, noting that he had found the map in a chain of title documents in a First American Title Company property history report on two specific lots within the Seacoma Beach area. “In my opinion the northern edge of the 80 foot right of way, is the northern edge of the existing street.”

“The plat map’s ‘Dedication’ clearly expresses the owners’ intent to dedicate an 80-foot-wide strip of land known as ‘Seacoma Boulevard’ for public use,” Lasnick wrote. “To the extent this public easement overlaps with the beach and tideland area, the public has a right to access the land, regardless of who owns the land itself.”

Nevertheless, signs reading “Private Property” and “No Trespassing” are commonplace on the beach side of SW 172nd Street, which lacks sidewalks but does have road signs warning motorists of pedestrian traffic. 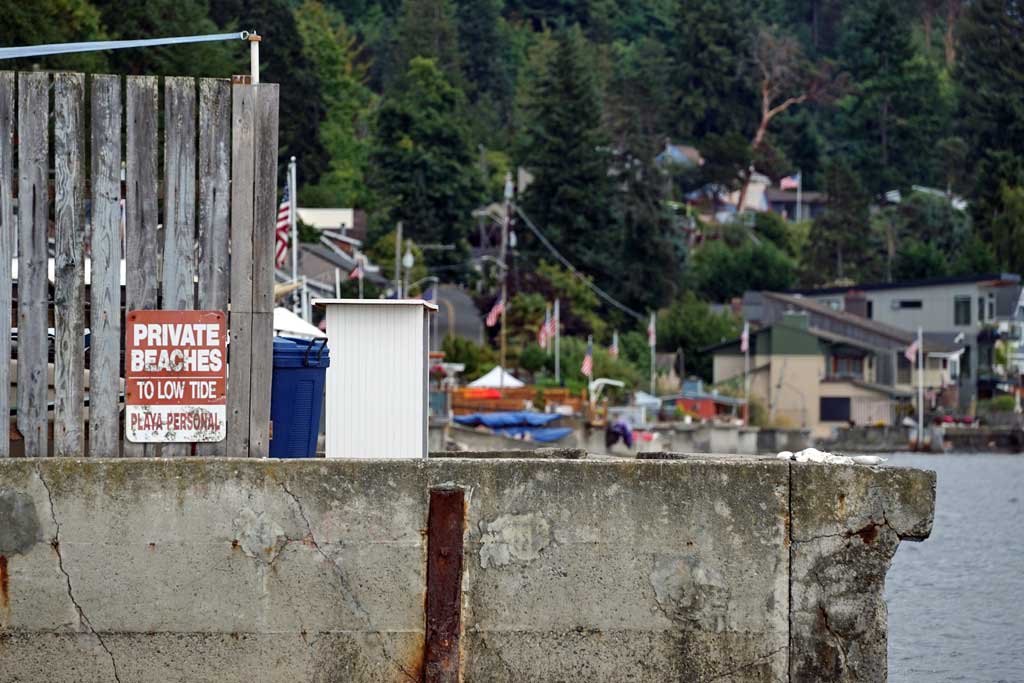 A sign facing a small section of public beach on the south side of Three Tree Point declares the beach beyond it private. A sign that reads “Private Property No Trespassing” faces SW 172nd Street from the beach side of the street along the south side of Three Tree Point in Burien.

In its letter, the city suggests those “Private Property” and “No Trespassing” signs are themselves unlawful.

The city also clarifies in its letter which type of right-of-way use permit it would require for permanent structures such as the beach cabanas, and under what conditions it might grant those permits.

According to publicly available permit records, the city has over the years issued other types of right-of-way use permits to property owners along SW 172nd Street, but it has issued virtually zero Type F permits.

According to those records, the city issued what might be a Type F right-of-way use permit around 2006 for one of the properties along SW 172nd Street, describing it only as a “long term permit,” which resembles the description in city code of a Type F permit as being “for a period in excess of 180 continuous days” and “for the location of permanent structures in the right-of-way.”

In its letter, the city says “each property owner should understand that the City of Burien continues to have an interest in, and an intent to use, the full width of the public street right-of-way for its intended purpose.”

What actions, if any, might follow the city’s letter to residents – whether it be property owners rushing to permit their cabanas or city officials ordering their removal or something else entirely – remains to be seen. 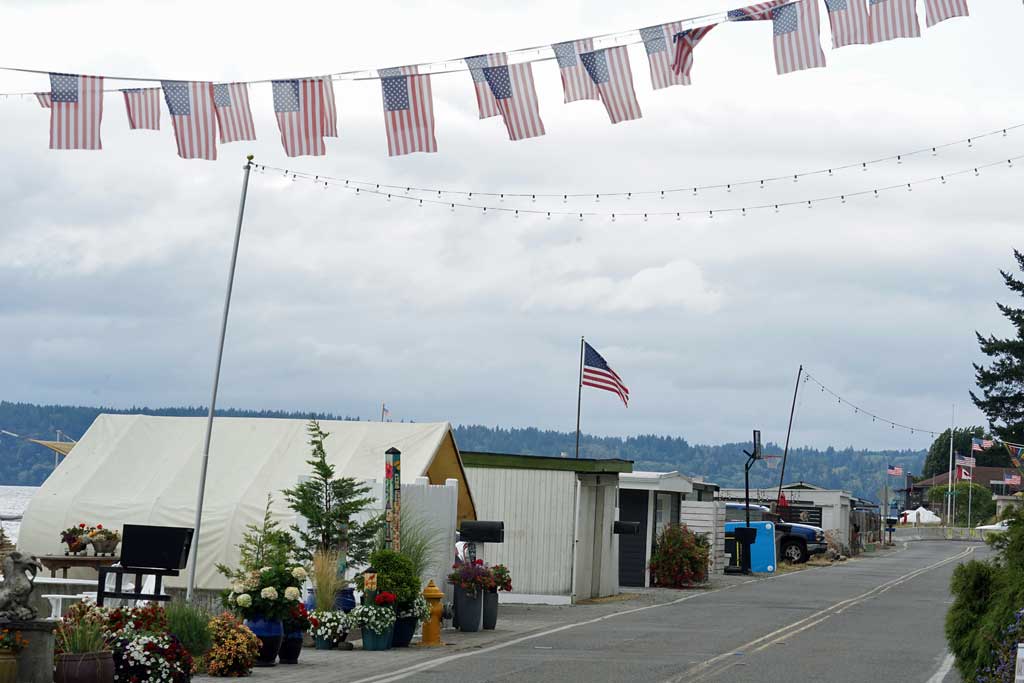 In the meantime, the Three Tree Point area does offer public access to other portions of the beach. A small section of public beach can be found at the corner of Maplewild Avenue SW and SW 172nd Street while, on the northwest side of the point, a much larger stretch of beach – long a popular destination for scuba divers – is accessible at the end of SW 170th Street.