Burien resident John White has paid to have water and tiles tested at the Burien Annex, which the City of Burien is planning to close on Jan. 31, 2020, evicting seven non-profits.

Both tests indicate that there is no danger of lead in the water or asbestos in the tiles to the tenants – including children – who use the facility.

White is also offering to pay thousands more for insurance coverage of the facility, in an effort to allow the current tenants of the Annex to remain in place until any issues can be resolved.

But despite his efforts to save the Annex, White says that he has been blocked – and perhaps even threatened – by Burien City Manager Brian Wilson.

“The City is not in agreement with Mr. White’s characterization of the lack of risk associated with tenants remaining in the Annex Building past January 31, 2020,” Wilson said in response to White’s tests. “Your unauthorized access and testing of the water and for asbestos in the Annex Building will not meet best practice industry standards and may have placed our tenants at greater risk.  Further actions by you in this regard at the Annex Building or any City owned facility may result in City legal action against you.” This chart was used to show “likelihood of risk” dangers to the Burien Annex in the MENG report. Listed in the red zone were Floor Tiles, Lead in Water, Fire Sprinkler, Ceiling Tiles and Chimney.

WATER TESTED
On Dec. 18 – at the invitation of Burien Actors Theatre – White personally tested the water in the Annex using a certified kit. Within 24 hours, he received results that conflict with the city’s contracted analysis that speculates – prior to any tests – that the water may be “not fit for human consumption.”

White told The B-Town Blog that the city had not tested the water at the Annex since 2008, yet was listing the potential of lead in it as one of the reasons they are closing the facility on Jan. 31, 2020, evicting seven local non-profits with just 53 days’ notice. The facility does have lead piping and soldering, which likely led to that speculation.

We heard reports that the city also recently posted warning signs on water fountains and sinks in the Burien Co-op Preschool, in front of young children during class. Some teachers were upset by this action, which they considered intrusive, inappropriate and possibly frightening for the kids.

The city hired MENG Analysis to evaluate the Annex, and in the key findings of their analysis (PDF file) they said:

“Old plumbing and piping with lead and other toxins likely present – drinking fountains labeled as not fit for human consumption. Water for restroom and kitchen functions may also contain lead or toxins.”

“I tested because you did not, putting fear into tenants, causing unjustified fear that chased their clients away, as they each testified at the meeting you attended,” White said in a Correspondence to the Burien City Council. “Your incomplete report caused them harm, and caused our city to lose insurance coverage. It is you that made the choice to do the report. You did so with no public discussion.”

Certified tests White paid for – done by Analytical Resources, Inc. of Tukwila – show that the levels of lead and copper are well below safe limits set by the Environmental Protection Agency, and are therefore safe.

NOTE: Water Testing Kits sold at hardware stores are easy to conduct, and results are certified for standards set by the Environmental Protection Agency.

“The EPA action limits are 1300 ppb for copper and 15 ppb for lead,” the ARI report states. “There is some copper and lead detected in your drinking water. However, the concentration in your water is much lower than the limits recommended by the EPA.”

Results of White’s water testing at the Annex show that levels of lead are well below safe EPA limits:

According to their website, Analytical Resources, Inc. “has been a leader for over 30 years in the environmental testing industry with experience across a wide range of analyses and sample matrices, producing the highest quality defensible data for both the private and public sectors.”

“The City’s MENG Analysis report did not state that the water in the Annex contains lead. Rather, the MENG Analysis report states that the buildings contain lead pipes and lead solder joints (See pages 3 of 17 and 5 of 17 of the MENG Analysis report). The report’s author concludes that the signage not to use the potable water in the building was likely a result of the existence of the lead pipes and solder joints and not necessarily as a result of water testing. In an abundance of caution, the City made the decision not to use the potable water in the event the lead pipes and lead solder joints resulted in lead in the water. While it is encouraging that — assuming Mr. White’s tests are accurate – there is no presence of lead in the water, one should not conclude that there is no danger of lead in the water at the Annex Building now or into the future.

“It would be inadvisable for the City to allow use of the water running from lead piping and lead solder joints in the hopes that potable water will forever remain safe. It also seems reasonable the City should notify the public of the risks associated with the water from the Annex that is provided through aged lead pipes and solder joints?

“The City’s report speaks for itself. The City is not in agreement with Mr. White’s characterization of the lack of risk associated with tenants remaining in the Annex Building past January 31, 2020.”

Wilson also said the following, which includes a threat of legal action against White for conducting tests:

“Your unauthorized access and testing of the water and for asbestos in the Annex Building will not meet best practice industry standards and may have placed our tenants at greater risk. Further actions by you in this regard at the Annex Building or any City owned facility may result in City legal action against you.”

White also had the water tested at the nearby Burien Community Center (the former library), which is where the Parks Department is headquartered.

“If that report says the water is bad are you going to kick the Parks Department out in 60 days?” White said.

The Community Center at 14700 6th Ave SW is actually four years older than the Annex, which was built in 1948, “but looks great because they took better care of it,” White added.

White also mentioned that other speculative claims from the city’s analysis – that tiles likely contain asbestos, or that the chimney is not seismically reinforced – could be mitigated (ie: covering tiles properly, fixing the missing cable on the chimney, etc.), and do not warrant closing the facility down and evicting the seven non-profits on Jan. 31, 2020.

TILE TESTED FOR ASBESTOS
White also took a sample from a floor tile in Burien Actors Theatre’s kitchen and had it tested for asbestos by Pacific Rim Environmental, Inc.

That test also showed no danger: 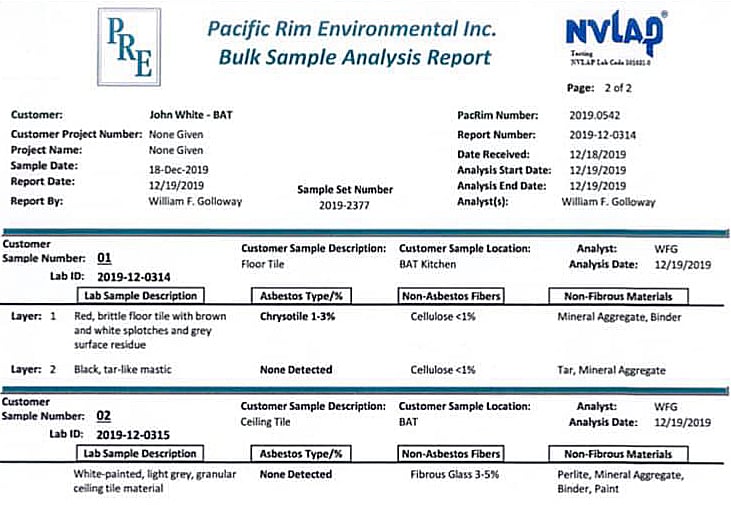 White sent a letter with his offer to the Burien City Council, in which he adds:

“The Citizens of Burien are requesting that you find a solution to the current issues surrounding the Burien Annex Community Center Building (the Annex). The late termination of lease notice received by the tenants of the Annex on December 9, 2019 does not allow adequate time for relocation by January 31st, as stipulated by city management. This time line places 7 non-profit organizations that directly serve Burien citizens at significant risk of dissolving or experiencing unrecoverable financial losses.

“On December 16, 2019 Councilmembers directed the City Manager to explore all possible options related to keeping the current tenants in the Annex for 6 months or longer. Insuring the Annex through Hentschell &amp; Associates, Inc. with the aid of private contributions is a viable option that should be immediately explored, per Council’s direction. Mr. Hentschell can be contacted through any of the following means:

“The City Manager should waste no time in pursuing this very viable option in accordance with your directions.

“I look forward to having further conversations with Mr. Ted Hentschell from Hentschell & Associates and their ability to insure the Annex Building. We will examine the coverage available to determine if the City’s risk and liability issues can be addressed with this insurance coverage.”

VIDEOS
Below are videos we’ve recorded about this issue:

OUR ANALYSIS/OPINION
This is obviously an ongoing saga which has not yet concluded, but we believe that if the Annex is indeed closed and tenants evicted on Jan. 31, 2020, not only might it become an ugly scene – perhaps with protests, or upset tenants chained to the building as King County Sheriff’s Deputies perform evictions, not to mention extensive media exposure – it may also put several of these organizations out of business.

It could also go down in history as the worst public relations disaster the City of Burien has ever had.

For the city to announce – without doing any actual testing – that the Annex might pose a danger to tenants, then to give them just 53 days’ eviction notice is unacceptable. Tenants should have been notified and involved in discussions months or years ago. And if indeed they were, why are most reacting to this issue so strongly? Something just doesn’t add up…

We are hoping that cooler heads (including the three new councilmembers) prevail at the upcoming Jan. 6, 2020 City Council meeting, and that – at the very least – tenants are given a reasonable window, perhaps until the end of June to move out, as well as a promise to move back into a new facility at similar rental rates at the same location if and when it’s fully repaired or rebuilt.

It would also be helpful if the city’s Annex Tenant Support Team could solidify their efforts of finding any new locations, as well as the necessary funding to help non-profits move. Has any progress been made?

Otherwise, say goodbye to what we and many others consider to be the “heart” of Burien – seven prolific/artistic/helpful non-profits whose absence will forever change the face of this city for the worse.

HOW YOU CAN HELP
We encourage all residents to continue writing letters to the Burien City Council about this issue (email [email protected]), as well as reach out to city staff.

Another option is to contact John White to offer any help or services to his independent efforts at [email protected].