A group of Burien teens stand beside a mural they created, along with their New Futures program manager and teaching artists from Urban Artworks, during a community celebration Thursday outside the Buena Food Market along Burien’s Ambaum Boulevard.

Standing shoulder to shoulder beside their freshly painted mural, 15 Burien teens raised their voices Thursday afternoon to tell a new story about their neighborhood – and about themselves.

“Our voice is as important as any,” one girl declared, reciting a line from the group’s collaboratively written spoken-word poem.

“We will be telekinetic, moving mountains with our minds; We will be dangerous and healing, learning new magic to disappear violence.”

The teens – all Latinx residents of Burien’s Alcove at Seahurst Apartments along Ambaum Boulevard – were gathered outside the Buena Food Market next door to their apartment complex to celebrate the artwork they had created, the poetry they had written and the bonds they had forged together over the prior six weeks.

Dozens of friends, family and fellow Burienites cheered, clapped and snapped photos of the teens as each received certificates of achievement and signed their names in the bottom-right corner of the 25-by-8-foot mural they had collectively researched, designed and painted on the south side of their neighborhood market as part of a youth arts program led by Urban ArtWorks.

“We’re so excited to be doing these hyper-local programs where youth actually create murals in their own neighborhoods,” Executive Director Amanda Hashagan said of the Seattle-based nonprofit’s long-running but newly expanded Mural Apprentice Program.

The idea of bringing that program to teens who live in the Alcove at Seahurst Apartments was sparked by the deadly March 2018 shooting of two other teens – Eveona Cortez, 19, and Elizabeth Juarez, 13 – over gang graffiti at the same apartment complex.

“Young people are the ones who are most impacted by things like gang violence,” said Hashagan, “which means they have the most at stake in the future of their neighborhood.”

In the summer of 2019, Burien’s Cultural Arts Supervisor, Gina Kallman, asked Hashagan if Urban ArtWorks would like to create a mural near the apartments. Hashagan agreed, then suggested enlisting young people from the area to develop and install a piece of art that they could truly call their own.

To assemble a group of teens, Urban ArtWorks and the city partnered with Southwest Youth and Family Services’ New Futures program, which has been working with young people at the apartment complex for some two decades, according to program manager Aurelio Valdez.

With that, the project was set to go ahead in the summer of 2020, Hashagan said, until the COVID-19 pandemic forced the nonprofit to put its plans on hold. When the project finally kicked off in late June of this year, it was working with $26,524 in COVID-19 relief funds, which meant Urban ArtWorks could bring in not one but three teaching artists, including mural arts teacher Scott Mexcal, spoken-word artist Sasha LaPointe and assistant teaching artist Natalia Sotelo.

“Throughout this program, we’ve talked a lot about art and expression, about community, home and place,” said LaPointe, who worked with the teens remotely, appearing to them on an 80-inch television screen at the Highline Heritage Museum, which opened its doors to the teens and their teaching artists earlier this summer for four weeks of in-person workshops.

“We’ve talked about identity and what it means to craft our own narrative, to tell the story of who we are and where we come from in our own words, on our own terms.”

When Mexcal showed the teens images of Mexican-American murals from around the country, he said at least one responded by saying that they felt those murals were too nice for Burien.

“I think they had a feeling of this place not truly being their home,” Mexcal said. “I think they felt disenfranchised.”

Some of the teens pointed out that oftentimes when people talk about Burien, they talk about the gang violence they’ve heard about on the news, Hashagan said, and that’s not what the teens want their city to be known for.

Mexcal said he told the teens that he had spent time in Compton, California, and South Central Los Angeles, which are places the teens knew of, he said, because they had heard about them in rap music.

“I told them that when I was down there it reminded me of Burien,” Mexcal said. “It’s known for violence, but most people also know it because of the creativity of the young people in those communities.

“We don’t have to ignore the violence,” he told the teens, “but we are also creative beings in this place, and we can showcase that, we can highlight that creativity over the violence.”

They didn’t just ask themselves; they took those questions to the streets, as well as the Burien Farmers Market, to get input from a wide variety of other Burien residents. With all that input, the teens wrote their own spoken-word poems, then turned those poems into their own visual artwork that informed their mural. On top of that, the teens put all their creative efforts together into an original zine, copies of which were presented back to them as keepsakes during Thursday’s mural unveiling.

Mexcal, who has been working as a teaching artist in the Seattle area since 2011, said he sees his work as being more about fostering the creative process and engaging with communities than producing the final product. Hashagan agreed.

“To me, the process of them building community, building trust with one another, gaining confidence in their own perspectives, and connecting with themselves and each other to come up with something that represents them and their community is just so important,” Hashagan said.

Nevertheless, the mural these 15 teens have created – dubbed “Our Story” – will undoubtedly serve as a reminder both to them and their neighbors for years to come that there is more to Burien, and particularly their neighborhood, than the violence that has too often dominated headlines.

“This mural gives them a chance to have a voice and a say in what their community looks like – in a literal way but also in a more symbolic way,” Mexcal said. “If we’ve done our jobs, there’s a spark here that will shape how these young people move forward and participate in their own community.”

never quiet
we are a storm
strong and full
of surprises

like a river rough and cold
loud and yelling, creative magic
a chrysalis to birth something new

our voice is
as important as any 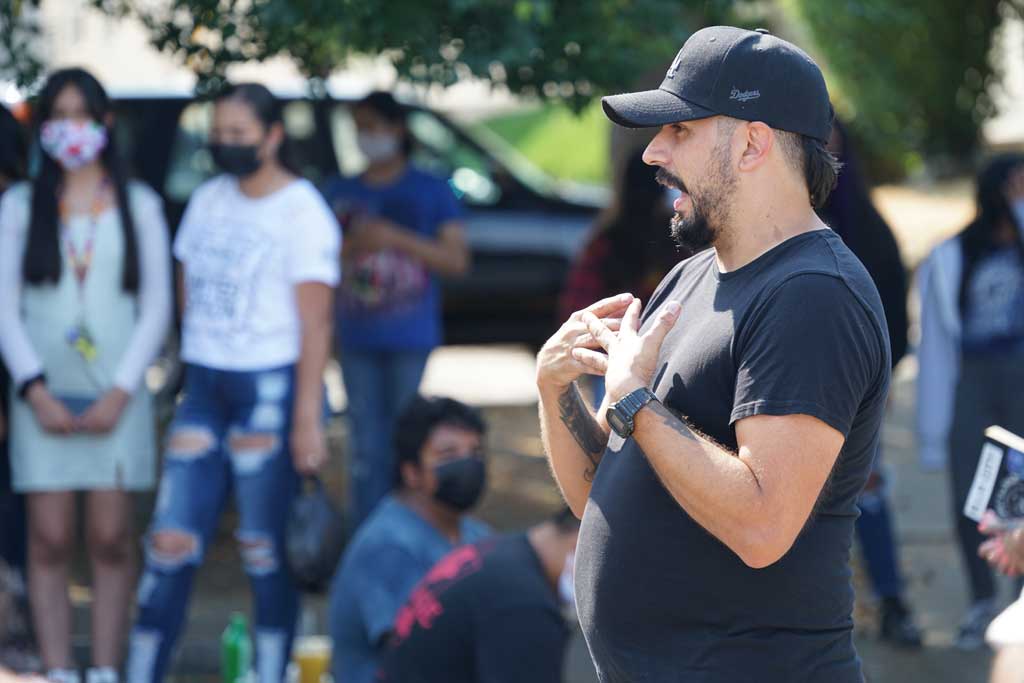 Teaching artist Scott Mexcal speaks to a crowd of people Thursday outside the Buena Food Market during a community celebration of 15 Burien teens who participated in Urban ArtWorks’ Mural Apprentice Program this summer. Spoken-word artist Sasha LaPointe addresses a crowd of people Thursday outside the Buena Food Market during a community celebration of 15 Burien teens who participated in Urban ArtWorks’ Mural Apprentice Program this summer. 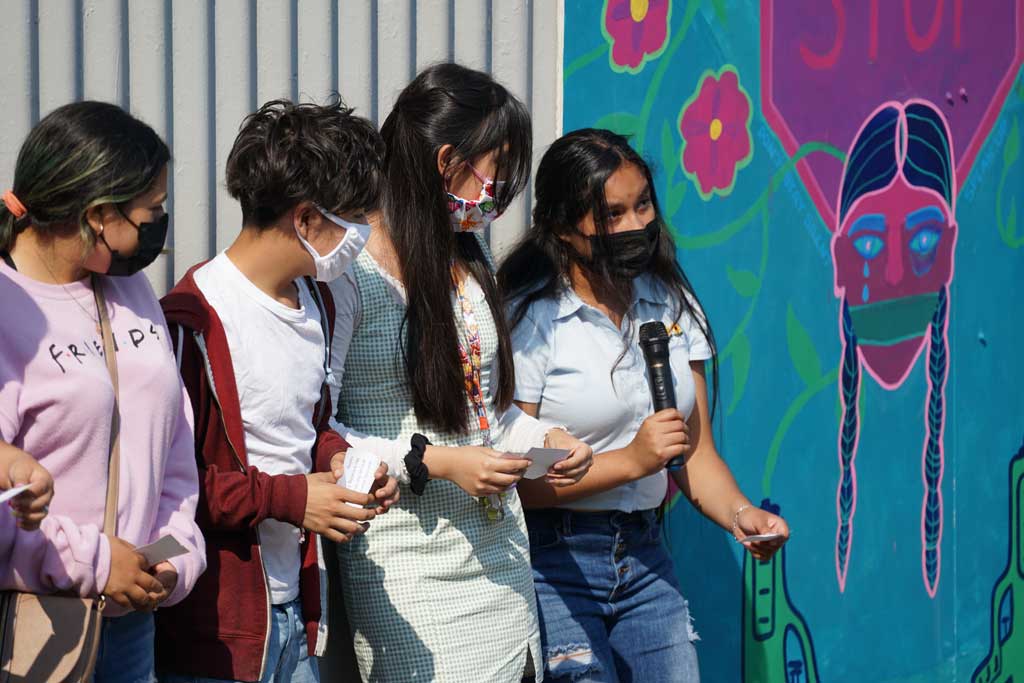 A group of 15 Burien teens take turns reciting lines from a collaboratively written spoken-word poem Thursday outside the Buena Food Market during community celebration of those teens’ participation in Urban ArtWorks’ Mural Apprentice Program this summer. Burien teenager Jan Aponte signs his name Thursday on a mural that he and 14 other teens created together as part of Urban ArtWorks’ Mural Apprentice Program. Burien teens who created a mural as well as their own original zine as part of Urban ArtWorks’ Mural Apprentice Program this summer gather to flip through copies of their zine Thursday after a community celebration of their artwork. Burien teens flip through copies of an original zine Thursday that they created as part of Urban ArtWorks’ Mural Apprentice Program this summer. Teaching artist Scott Mexcal writes the mural’s title – “Our Story” – in the bottom-right corner of the mural next to the names of the 15 Burien teens who created it as part of Urban ArtWorks’ Mural Apprentice Program. 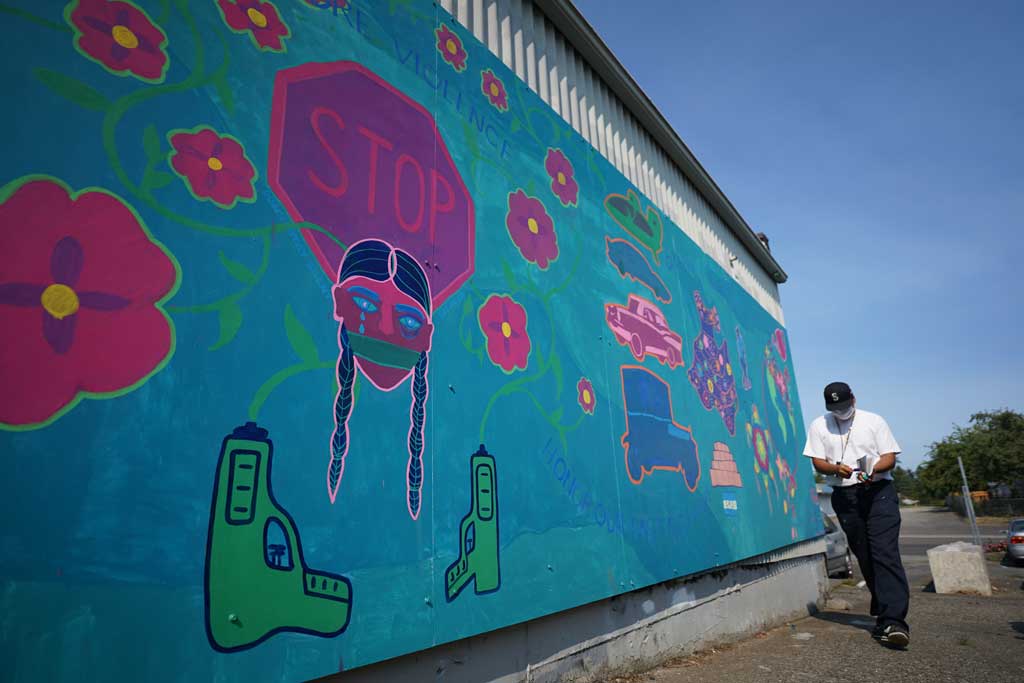 New Futures program manager Aurelio Valdez walks past a mural created by 15 teens he works with at the Alcove at Seahurst Apartments in Burien after a community celebration for the teens Thursday outside the Buena Food Market.