EDITOR’S NOTE: Burien’s colorful Black Zia Cantina closed in June, 2020 due to the COVID-19 pandemic. The following is a submission from a local Artist recalling some of the creative happenings that took place the joint, which was located in the space previously occupied by Sal’s Deli at 15212 6th Ave SW:

Four years ago, on the night of Jan. 20, 2016, Black Zia Cantina in downtown Burien played host to an art show of political conscious, We the People.

The show, curated by Serpent and Crow, featured art from more than 12 different artists, and was an outpouring of the feelings of the results of the 2016 election of Donald Trump as the 45th president of the United States of America.

Feelings of grief and rage, disbelief and sorrow, and the feeling of the uncertainty that the next 4 years would hold provoked images raw and heartfelt. A special photo series from the then current revolution in Ukraine curated by O (also known as Olga) showed normal everyday people in extraordinary circumstances, something that before this moment seemed unimaginable in America. Posters of the anniversary of the communist movement in India, portraits of Hillary and Donald, patches proclaiming feminine autonomy, and a canvas painted all black were some of the pieces you could see that night. A table was set up for people to make posters and signs for the scheduled Women’s’ March the next morning, at which a group of youths armed with markers and paints sat. Words of anger and defiance were thrown onto the unassuming pieces of cardboard with passionate conviction.

It was an electric night.

It was just one of many exciting art shows hosted at Black Zia Cantina.

It seemed appropriated that on this night, the 4-year anniversary of the chapter in history that we have all just experienced to write this requiem for Black Zia Cantina. From the bar’s opening night to the last closing shift, Black Zia vigorously embraced art. Art was as much a part of the living soul of Black Zia as was loud music and stiff drinks.

Subject matter was never censored. Black Zia was a place where you could see the dark and obscene, the obscure and profane; a bastion of free speech, where art was valued over politics. Expressions of first-time artists frequently decorated the walls at Black Zia, several times the art of employees was featured.
The musical diversity of the jukebox was a direct reflection of the staff and patrons. Black Flag followed up by Ice Cube with a spattering of Dolly Parton or Journey thrown in. Johnny Cash mixed with some Greenday, Whitney Huston, Chumbawamba and Type-O Negative made for an eclectic soundtrack while one could enjoy the signature Black Zia or Bloody Maria. The stage hosted a similarly diverse lineup, from punk to heavy metal, crust punk, rap, spoken word and open mic night. Comedy night, drag shows, and even community events were part of the Zia scene.

Black Zia was a gathering place for the strange and unusual, a safe space for the freaks to raise a glass together. Because of Covid, we were unable to have a closing party; We were unable to say goodbye to ‘our spot’, the last glass was never raised and the commemorative toast has been left unspoken.
I would invite the community to raise a glass together this evening for Black Zia. Raise a glass for a bar that was not afraid to exhibit scary art, a spot not afraid to play music too loud, a spot where us freaks could feel at home.

Cheers, Black Zia. Thank you for embracing tolerance and diversity. Thank you for giving this curator the opportunity to encourage new and emerging artists to exhibit their work. Thank you for supporting independent artists and performers in Burien. 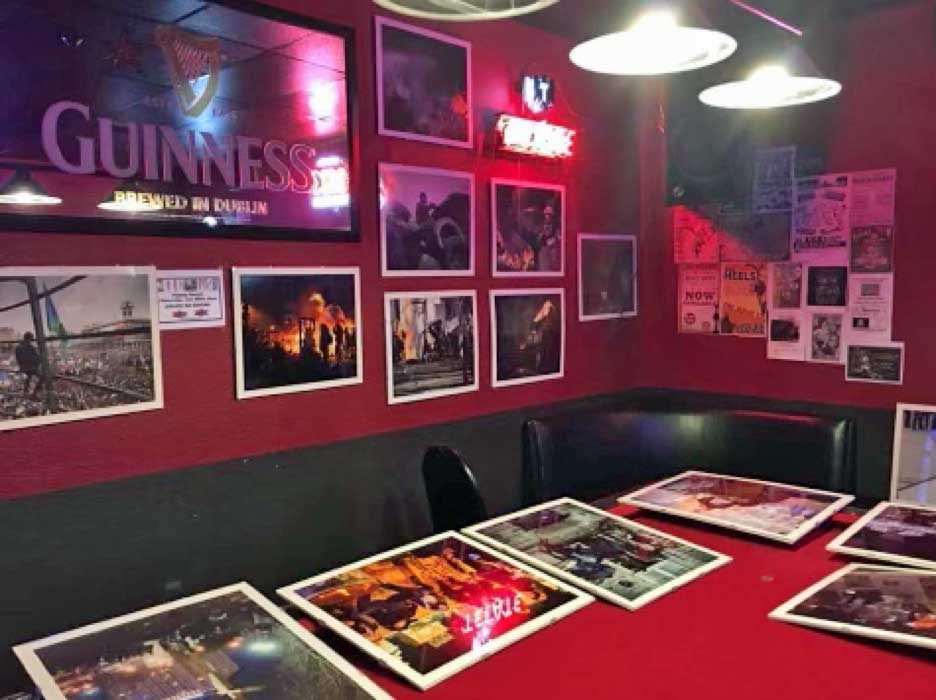