Over a year’s worth of hard work and investigation concluded on Wednesday, Dec. 22, 2022, when detectives in Precinct 4/Burien Police Special Emphasis Team made one final seizure in ‘Operation P-22,’ one of the region’s biggest drug busts.

Police served a series of coordinated search warrants around south King County, which resulted in large seizures of illegal narcotics.

This was one of the agency’s largest seizures and was also Narcotics Detection K9 Quinn’s first career operation.

Police say that overall, 400 pounds of methamphetamine and nearly 500,000 fentanyl tablets were seized during this investigation, along with cash, guns and cars. Twelve suspects were arrested.

“Burien PD will continue to work diligently to interrupt the supply of narcotics into our community,” Burien police said. “This case is the result of hard work by your Burien detectives and our partner detectives at Precinct 4. I want to thank them for their dedication to our community’s safety!”

Precinct 4 SET detectives conducted the operation with the assistance of other KCSO detectives from contract partners of Shoreline, SeaTac, Maple Valley, Metro, and TAC-30. Search warrants were served at multiple locations in King County. From these warrants, the following was seized:

Police say that the seizure included enough fatal doses of fentanyl for the entire population of King County. These numbers are staggering, yet they pale in comparison to the total narcotics located in the entirety of the operation, which amassed to:

Along with the narcotics and firearms, four cars were seized, $520,817 cash was confiscated, and 12 suspects were arrested (six of which were booked on subsequent narcotics charges).

“We’re incredibly proud of our detectives for the hundreds of hours they spent investigating, writing warrants, and working with prosecutors,” police said. “Our work on removing illegal narcotics and firearms from our communities won’t stop here though. While we see Operation P-22 as a success, tomorrow our team will be back preparing for the next operation.”

“Our SET team knows every gun, and every fentanyl pill taken off the streets is a life saved. They, along with every deputy (human or dog) at KCSO are dedicated to enhancing the safety of our community and its members. Thank you for trusting us to do so.” police added.

This operation was named in honor of SET Detective Brad Smith who has served the King County Sheriff’s Office for over 37 years.

Below are photos from the bust courtesy Burien PD/KCSO: 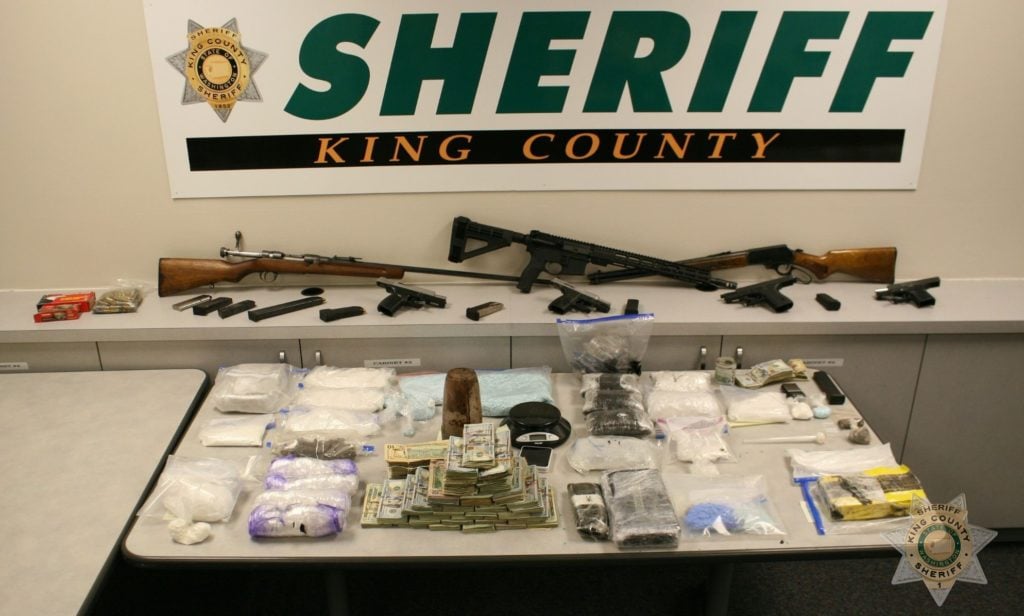 Along with narcotics/weapons, 4 cars were seized, $520,817 cash was confiscated & 12 suspects were arrested (6 booked yesterday on subsequent narcotics charges). This was one of KCSO’s largest seizures & also Narcotics Detection K9 Quinn’s first career operation.

Our work on removing illegal narcotics and firearms from our communities won’t stop here though. While we see Operation P-22 as a success, tomorrow our team will be back preparing for the next operation. Thank you for trusting us to enhance safety in our communities.